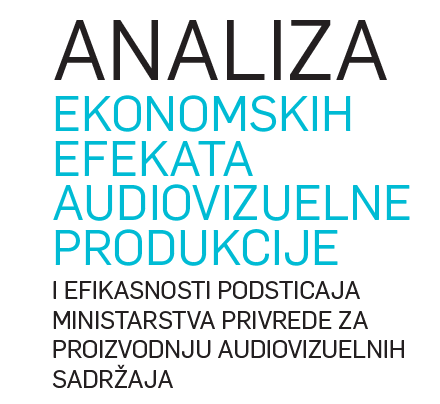 Serbia Film Commission together with the Faculty of Economics conducted an Analysis of the Economic Effects of the Incentives for Investment in Audiovisual Production under the auspices of the Ministry of Economy in support to production of film, TV series and commercials. The analysis, done in common global methodology framework, was first in Serbian practice, giving an overview of the full effectiveness of incentives from their introduction in 2016 till present.

The aim of this research was to measure the specific economic effects of the service-oriented production sector and the incentive program beneficiaries, to improve its further incentive and monitoring mechanisms, to highlight the contributions that the audiovisual sectors have to the country’s economy, being a major pillar of the creative industries. The detailed data focused also on the comparison within the sector measuring the contribution of each sub-sector that is supported. The figures on the TV commercial performance made outstanding arguments in support to sustainability and effectiveness to the sector economic rational. The Incentive Regulation, from April 2016 up to now, with a total of 17 million EUR supported the realization of 24 films and 22 series, out of this sum 20% was spent on attracting 88 TV advertising project shot in Serbia, generating total of income of 67,7 million EUR to the economy till August 1st 2019.

The results showed that the utilization of the Incentives` budget is between 92% and 95%, while the total return on investment that the state receives from subsidies is 5.38. In 2019, the number of employees in the industry has increased by an average of 57% compared to 2016, and over the previous four years the number of full-time equivalent employees, the FTE index, reached 11.110. The analysis also estimated that the variety of formats supported by the incentive program was a great way to deepen the destination portfolio, encompassing better market and geo-targeting of foreign clients.

Proving of self-sustainability of incentive programme, 11.567.613 EUR of the total tax was paid on the basis of VAT, contribution tax and annual profit tax of the companies that participated in the survey.

Especially significant is the effect that the industry has on tourism, since foreign productions had 44.889 hotel overnights from 2016 to 2019, and generated a total tourism contribution of 3.680.898 EUR only on account of accommodation costs.

Long term goal of the Analysis was to lay grounds for specific methodology which will in future provide annual monitoring of the incentive effects and performance of the entire sector.

The full findings and Analysis are available in Serbia on the link HERE.