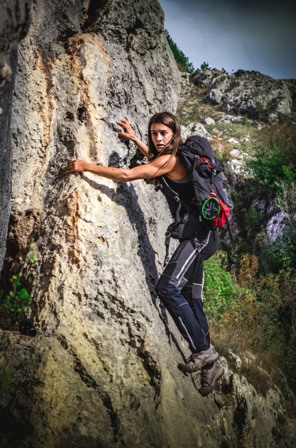 The female-driven action story The Ledge started principal photography in special nature reserve Jelašnička gorge in Serbia beginning of October. Directed by Howard J Ford (Never Let Go) film stars an enticing young cast of actors including Brittany Ashworth (The Crucifixion, Hostile, Accident Man), Ben Lamb (Divergent, Now You See Me 2), Louis Boyer, Nathan Welsh, David Wayman and Anais Parello (Offensive, I-Art). Commenting from the set, director Howard Ford stated that every mountain is a challenge but with enormous help from Red Production and their amazing team in Serbia this team effort is going to be a winner!

Climbing thriller features never seen on screen locations around Suva planina in southern Serbia that are doubling for Dolomites, in combination with settings in and around Belgrade including some studio built décor. Niš City Government provided huge support on the set showing that film friendly concept is well working throughout the country. The Ledge is produced by Kate Hoffman and Fred Hedman of Evolution Pictures, company dedicated to genre movies, and Miloš Đukelić of Red Production Belgrade, prolific production service company able not just to provide services but also to develop project as a producer. Worldwide rights are being handled by GFM Film Sales.

Described as a female cliffhanger, Evolution Pictures managed, with the help of Red Production, to make COVID-proof arrangements in Serbia to allow shooting to commence. Cast & crew, among whom many are passionate climbers, are monitored daily to comply with Serbian regulations.

“The Ledge is exactly the type of movie that Evolution was formed to make. A great piece of writing with a dynamic director capable of creating something unique and commercial, with an exciting young cast, all of whom are emerging talent. COVID was an enormous obstacle to overcome but with the help and support of Sheila Fraser Milne from Paterson James, Miloš Đukelić from Red Production and Phil Hunt of Headgear, we are now in production”, said Fred Hedman.

Producer Miloš Đukelić said: “The story of The Ledge is an interesting parallel with the effort it takes to make a movie of this scale in the middle of the pandemic!  When I met Fred and Howard I was impressed by not only their professional approach but by their real passion for this piece.  It was an easy decision to join the film as a producer.  It’s a roller coaster ride, full of adrenaline.  Red Production is very experienced in filming in Serbia and also working with producers in order to benefit from the Serbian incentives which are very advantageous.  We’re all living on the ledge these days and the only way is up!”