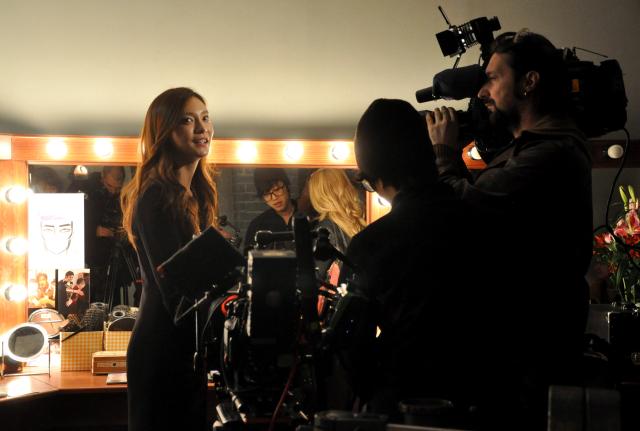 Serbia Film Commission organised a visit for journalists to the film set of the first Korean film production shooting in Serbia. The film is a true story of one of the most famous Korean opera singer Bae Jae Chul called Lirico Spinto for his peculiar voice, who at the peak of his career sufered from tiroid cancer and lost his voice in 2005. The story is set in Korea and Japan where he went for treatment and recuperated his voice.

Locations in Serbia are doubling for German where he spent golden age of his career. Locations that were used to depict city of Saarbrucken are Serbian Parliament building, White Palace, KUD Lola and Belgrade borough of Zemun.

The filming started in mid January. The Korean of crew 48 members was shooting for 3 weeks, and the whole production should be finished by end of April. The premiere is planned for the Venice Film Festival.

This is the first opera movie in booming Korean film production, and music for the movie was also completely done in Serbia last year. The orchestra of 60 philharmonic musicians and sound designers did the complete orchestration and choirs. Serbian actors Natasa Tapuskovic and Dragan Micanovic are also playing the leading roles of young opera diva and Jae Chul’s manager. 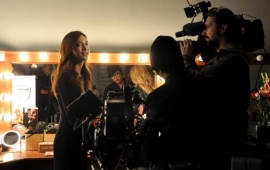 Serbia Film Commission organised a visit for journalists to the film set of the first Korean film production shooting in Serbia. The film is a true story of one of the most famous Korean opera singer ...
MORE 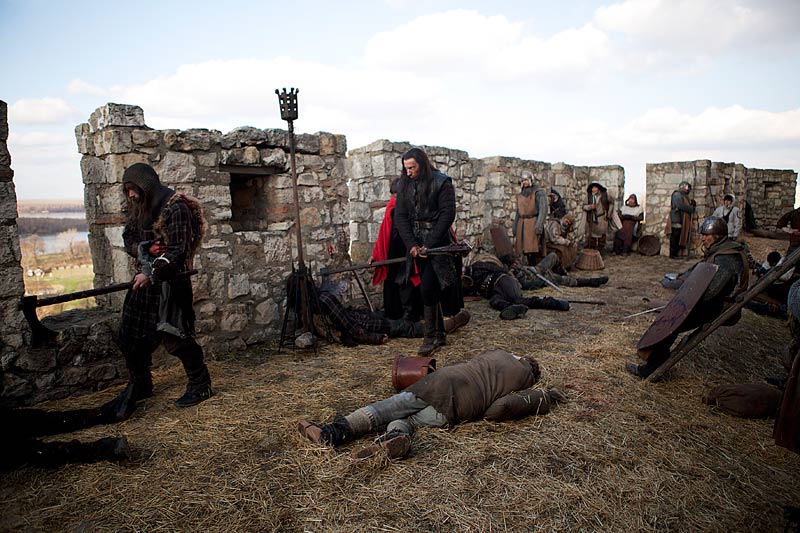 Epic medieval action movie Ironclad just wrapped a final day of shooting for the sequel under the title IRONCLAD BATTLE FOR BLOOD in Serbia. The filmmakers of the worldwide hit choose to use medieval fortresses of Belgrade – Kalemegdan, Maglic near town of Kraljevo and Golubac on the river Danube to portray medieval England and castle fights with Celtic raiders. Beside extraordinary nature and fortresses, a large part of the movie was also done in the sound stages at the brand new and state-of-the-art PFI studios, in Belgrade. Impressed by the charm of the emerging film locations of Belgrade, sophisticated local crews and competitive prices, they awarded local production in Serbia to RED PRODUCTION and its founding producer, Milos Djukelic, well known for servicing advertising productions in the region.

“All the heads of departments and crew are local which proves how developed the film authors and industry here in Belgrade has become. We are thrilled to have brought this international production to Serbia”. Djukelic said,

Serbia also has so much to offer in postproduction and this is the second US movie Red has done this year. BlackJacks (2013) directed by Nicolas Mezzanatto is currently being completed by Red Production as its local partner. The action thriller is taking advantage of local CGI animation, visual effects and the audio and video postproduction will be completed in Belgrade. 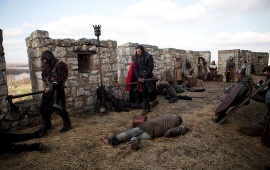 Epic medieval action movie Ironclad just wrapped a final day of shooting for the sequel under the title IRONCLAD BATTLE FOR BLOOD in Serbia. The filmmakers of the worldwide hit choose to use medieval ...
MORE

FMX was first held as an event for students titled “Film and Media Exchange” in 1994. It soon became an annual event attracting the largest world studios and companies operating in the world industry of digital imagery. FMX is the largest European conference of its kind, and together with Siggraph, which is held in the USA, one of the most important in the world.
Alongside world renowned visual effects and animation studios like Weta Digital (The Adventures of Tintin, The Lord Of The Rings, Avatar, Rise of the Planet of the Apes), DreamWorks Animation (Shrek, Madagascar, Kung Fu Panda), Sony Pictures Imageworks(Alice in Wonderland, The Smurfs), the conference hosted a large number of smaller studios working on visual effects for film and gaming.
3lateral, a studio from Novi Sad that specializes in the creation of advanced models and rigs for computer generated characters for film and video games, presented its work at this conference. Together with Crater Studio from Belgrade, 3lateral had worked on the visual effects for feature films The Other Guys (2010) and Shark Night 3D (2011). 3Lateral’s team’s portfolio includes involvement in few major character driven titles such as Grand Theft Auto IV and Red Dead Redemption from Rockstar Games. 3lateral crew comprised of Vladimir Mastilović, founder and CEO, Aleksandar Popov, art director, and Vojislav Pavkov, character rigger, held a two hour workshop for about a hundred students and professionals from the industry of visual effects. The key subject of the workshop was a deconstruction of the production process of a two minute animation that was presented for the first time by 3Lateral at FMX conference. In line with their primary focus, high quality digital characters, 3Lateral created a fictional character – Athanasius, a ruler from ancient Greek myths, whose power is weakening in a world that is becoming too complicated for his uncompromising attitude. The workshop was laid out in such a way that it imitated the production, so the story about the character design opened the workshop. Aleksandar Popov explained the motives for articulating the initial idea, which was a nice illustration of the influence of media expansion in the last couple of decades, even on the character design process, since the final design was a fusion of works of the famous fantasy artists of the 80’s from the last century, with popular national sportsmen, and of course, with characters from the movies like Caligula and Gladiator.

Vladimir Mastilovic built upon Aleksandar’s presentation explaining the approaches for “breathing life” in to the designed character. 3Lateral has a bit specific focus in their portfolio, predominantly on the creation of rig systems for facial animation. With the advancement of the gaming industry, there is a growing interest for complex characters, and with it, for characters’ faces as the main means of communication. This enabled 3Lateral to emerge in the international market of the entertainment industry, both gaming and feature film. During his part of the workshop, Vladimir explained the options for the creation of the systems for animation through examples, emphasizing advantages and disadvantages of every principle. At the end, Vladimir presented an interesting research performed in 3Lateral studio, which is based on the idea of creation of a virtual double by means of 3D scanning technology. Application of this technology are numerous – from the obvious ones like creation of digital doubles for scenes and actions not possible in reality, over rejuvenation of an actor/actress, to complete replacement of a person, etc. Vojislav Pavkov, facial rigging specialist, continued by deconstruction of the design into concrete steps for the reproduction of an important part of the overall system, the subsystem for combining basic facial expressions and the protection from the impossible combinations. It is significant to mention the participation of dr Steve Caulkin from Cubic Motion company from Great Britain. 3Lateral is cooperating with Cubic Motion for years, combining their systems for facial animation with own solutions for human facial recognition from a video footage, and transfer of the animation to digital characters. This proved to be a great complement to the systems produced by 3Lateral, because the whole process focuses on the preservation of the actor’s performance, and it perfectly fits within the logical production evolution – i.e. going back to the traditional recording methods, where the emotion and the intention is determined on the set, and not in the post production. The animation can be viewed at http://3lateral.com/projects/Athanasius/

This year the 3,300 attendees of FMX from 50 countries were comprised of approximately 60 percent professionals and 40 percent students. 329 speakers from 24 different countries offered presentations. 75 companies from a total of 15 countries presented their products, services and achievements. FMX 2013 is held from April 23 – 26 in Stuttgart, Germany. 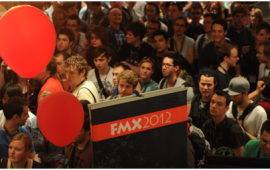 FMX was first held as an event for students titled "Film and Media Exchange" in 1994. It soon became an annual event attracting the largest world studios and companies operating in the world industry ...
MORE 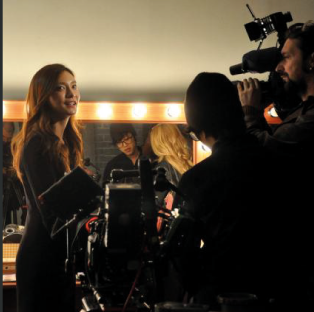 Cannes – May 19th 2014. Serbia Film Comission representatives are currently at the 2014 Cannes Film Market. During their stay in Cannes, the SFC members have meetings with producers from Europe and the United States, and important meetings with partners from new markets, especially India and the Far East are also organized. Preparations for the Danube conference are carried out simultaneously with the presence at the most important European film market. On this occasion, Ana Ilic, Executive director of the Serbian Film Commission and Milica Božanić, Operations Manager have meetings with colleagues and producers from the Danube countries. The SFC representatives traditionally participate at the meetings of the European Film Commision Network. The SFC members are also in Cannes – DigitalKraft, Viktorija Film, Red Production, Art&Popcorn, Gargantua Films. Representatives of Viktorija Film and Gargantua Films promote their films in Cannes – Nymph and Little Buddho. The production company More In Group is also being promoted in Cannes. In cooperation with Viktorija Film, last year they have finished shooting the film The Tenor in which prominent roles achieved Natasha Tapušković, Svetozar Cvetković and Dragan Mićanović. The film will premiere at the festival in Shanghai, and producers expect particularly great success in Japan. 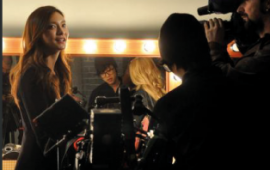 Cannes - May 19th 2014. Serbia Film Comission representatives are currently at the 2014 Cannes Film Market. During their stay in Cannes, the SFC members have meetings with producers from Europe and th ...
MORE