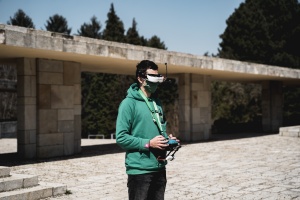 Speaking about first-person view flying, or FPV, drone operator Filip Petronijević says it provides a real feeling of flying. Actually, that you feel as if you were a pilot because you are flying in real time using a drone camera. Since this technique has already become his trademark, Filip explained to us how exciting his life was when this hobby took him to three destinations at the same time, why world drone community is so special and how he manages to fly and control the camera at the same time.

In the last years, drone sequences have become inevitable in film and TV projects, but also in music and advertising videos. That is the reason audience got completely different perspective of Serbian locations and enjoyed many attractive shots. What type of projects do you enjoy working most? What was the most complicated one or the one you are most proud of?

Since I have recently entered the industry I am still not well-known for some specific kind of projects, I mean, people do not recognize me as someone who does only films or music videos and every new job is a specific experience. It doesn’t matter if it is live event, commercial, music video or a film. Audience usually recognize me by my first-person-view style of drone piloting  and this type of drone is becoming increasingly popular in the world; thanks to that I ended up in many different parts of the world, and the most extraordinary experience I had was a live broadcast of Ben Böhmer’s performance in Cappadocia. Since these drones are still not so common, I’m trying to find new ways of their use and the most demanding are technical shots like the one where I act as a continuous crane through a large space or when I have to fly close to extras and do crazy acrobatics around them. 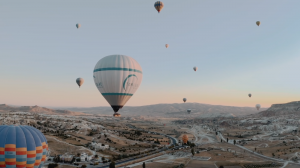 Thanks to your spectacular works in Serbia, you received an invitation from the Cercle livestream media channel to record a DJ set by Ben Böhmer in Cappadocia. The video reached over 8 million views and the air shots of this exciting destination are spectacular. How did this collaboration look like? What kind of experience was it for you?

The experience was unforgettable because I had a lack of sleep at that time, but that’s probably normal in this industry as far as I could see. I had couple of parallel shootings within those four days which was something completely new for me. I started with late night film shooting, then I went to Belgrade to catch a morning flight to Cappadocia to shoot there the whole day. The next day I went back to the south of Serbia on a film set and finally in the evening I came back to Novi Sad to film the Exit Festival.

Cercle livestream are great as a team, everyone is full of positive energy and they are generally completely relaxed. Actually, they are so relaxed that in fact, on the outside they don’t look like a team that keeps everything under control, but they’re really well organized and know their job. One part of the crew was in a balloon with a DJ, while the drone crew was mobile and we were flying from a pickup truck which we used to chase a balloon through the city. Due to the autonomy of my drones, their batteries last two to five minutes depending on the mode and speed of flight, we had to stop often. Luckily at one point the wind slowed down and balloons were more or less in the same position so we filmed them from one parking lot because we had a good range there. After the set was done and our celebration wrapped, we had an organized balloon flight for the rest of the team in the morning, and in the afternoon we returned to Serbia. This was the only project that Circle made “Behind the scenes” for – this is how the project was significant to them, so I am sharing this material with you on LINK. 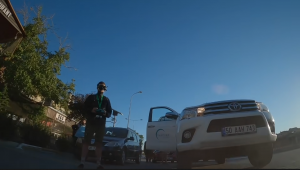 What is the most important aspect of being a drone pilot? Flying or working with camera?

Both are equally important and only together, in symbiosis, they can produce the right effect. So, I initially spent a lot of time creating a memory in my fingers to control camera’s gimbal in order to align it with drone’s movement as I pay attention to it and vice versa. I became really good at it, but as more expensive and better equipment came and offered plenty of opportunities for making more creative shots, I decided to introduce my girlfriend to this hobby (because for me – it is still hobby), so I started teaching her to move the camera so we could make even better shots together. In the end, I realized that even if I am a dual operator, it is still easier when the work is divided and everyone concentrates on their specific position.

What is the difference between your way of working and other colleagues’ style? Is there a big difference when approaching TV commercials from the work on film?

I think that the most important thing is to feel the course/direction of that specific scene you are working on in that moment, and accordingly to that, to adjust the speed of the drone’s movement, regardless of whether the commercial is being shot or something else. I think my biggest difference from my colleagues is that I fly both cinema and FPV drones, so the experience from both modes of flying helps me to implement the experience from one style to the other.

What represent a bigger challenge for you – shooting indoors or outdoors? What are the lessons learned?

It is always a bigger challenge to shoot indoors. You are more likely to make a mistake due to all objects nearby, so it is best to suggest the use of other equipment that would be more suitable for shooting in such a space, especially if the risk is too big. I like to push my limits and to act as the crane in every situation, but I am slowly learning that sometimes it is better to slow down and let other people finish the job. The indoor flying technique itself is different, compared to the outdoor one, so the experience in this area is crucial. Inside, your freedom and speed of movement are quite limited – you must not get too close to objects, floor, ceiling because it causes air to stir and thus many other problems. Also, you can’t use some extensions, that most beginners get used to when they start this hobby, so you can easily get into trouble. That’s why it is best to learn everything manually. Did you have the opportunity to collaborate or meet drone pilots from other countries? How does that community work? Are there any trends or new ways of shooting?

I had the opportunity to work on a commercial, shot in Serbia, together with the most famous pilot of the FPV style, known as JohnnyFPV, which still seems like a dream to me because I followed him at the very beginning of my drone story and he was always my role model. Another totally crazy situation from that shooting was getting in touch with another great pilot who contacted me while doing some other shooting in Los Angeles, because the same team was filming a new commercial for Adidas in Serbia, so they recommended me to him. In general, the entire FPV community is in contact through various world groups and everyone is happy to help and respond to messages because we are all currently entering a hobby together, in order to make each member progress with some new knowledge.

What is your favorite shooting location and where would you like to film next, both in Serbia and abroad?

At the end of 2020 I had an invitation to film in Mexico and then in the Bahamas, but unfortunately due to a visa that I failed to complete on time I missed that invitation so I hope there will be some similar calls again. Iceland is my wish, as for mostly of my colleagues I assume, because I think my creativity would bloom there thanks to the beautiful nature all around you. Also I would like to fly over the Great Wall of China or over the top of the Alps. And Thailand wouldn’t be bad, either. I would like to make a documentary for the BBC or National Geography in such locations. In Serbia, I like Stara planina the most.