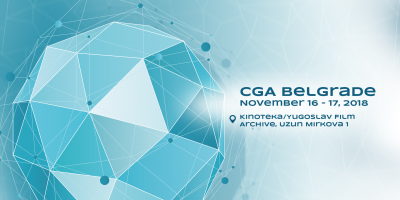 Once again, November becomes the month of computer graphics, as CGA Belgrade hosts its two-day journey through the latest news, trends and developments in the industry of computer graphics for film, advertising, games and virtual reality. The home of the conference during November 16th and 17th will be Yugoslav Film Archive, Uzun Mirkova 1.

Serbia Film Commission together with Crater VFX Training center and VFX Serbia are bringing Hollywood’s finest and indie superstars, from local heroes to global sharks, with masterclasses, insider tips, life lessons and everything in between in a jam-packed two-day program. Topics important for modern production workflow will cover virtual production, real time compositing and delivery of premium advertising campaign.

The biggest star of this CGA Belgrade conference will be Mike Seymour, founder of VFX Guide and ambassador of technological development of computer animation, whose online platform was the starting point for generations of artists around the world. Designing the look and some of the scenes in Blade Runner 2049 movie will be presented by Shahin Toosi, while Victor Perez will talk about how the experience he gained on film series such as “Star Wars” and “Harry Potter” can be applied on projects with a much smaller budget. Alongside a number of foreign lecturers from the academic and professional CG world, a number of successful Serbian studios and freelance artists will present projects realized in cooperation with international clients and partners in film, advertising, and gaming industry.

Virtual reality fans will be able to get into the experiences created by digital artists and production studios and directly in the virtual environment to walk through the largest domestic VFX studios. In addition to this, the CGA Belgrade Conference this year opens the opportunity for meeting recruiters from Framestore, Pixomondo and Cinesite, who will be introduced to local talents in Belgrade and exchange ideas on the projects they are currently working on, as well as on the possibilities for potential cooperation.

A two day workshop for VFX Producers run by Andrew Brassington from Escape Studio will give a snippet of the London leading school in animation new 12 weeks training programme for producers in VFX.

Registrations for this highly expected second edition of CGA Belgrade Conference 2018 are ready to start. Professional and student badges are available via Eventbrite system, and all you need to do is register by visiting this link.

CGA Belgrade is supported by Epic Games, 3Lateral, Autodesk, Foundry and Chaos Group alongside long list of industry partners such as Escape Studios, Nordeus, Mad Head Games, QL Beans… The conference has received institutional support from the Austrian Cultural Forum, the Embassy of Canada in Belgrade and the Spanish Cultural Promotion Agency, as well as the support of the Government of the Republic of Serbia within the Program for Business Capacity Building in the IT sector, which is being implemented in cooperation with UNDP. CGA Belgrade is being held under the patronage of the Office of the Prime Minister of the Republic of Serbia, in cooperation with its Creative Industries Council, and within the framework of the Serbia Creates Platform, which aims to represent Serbian talents, innovation and digital community.